The 50 US states ranked from most to least healthy. Connecticut Ranked #3.
Business Insider

The 50 US states ranked from most to least healthy. Connecticut Ranked #3.

The 50 US states ranked from most to least health 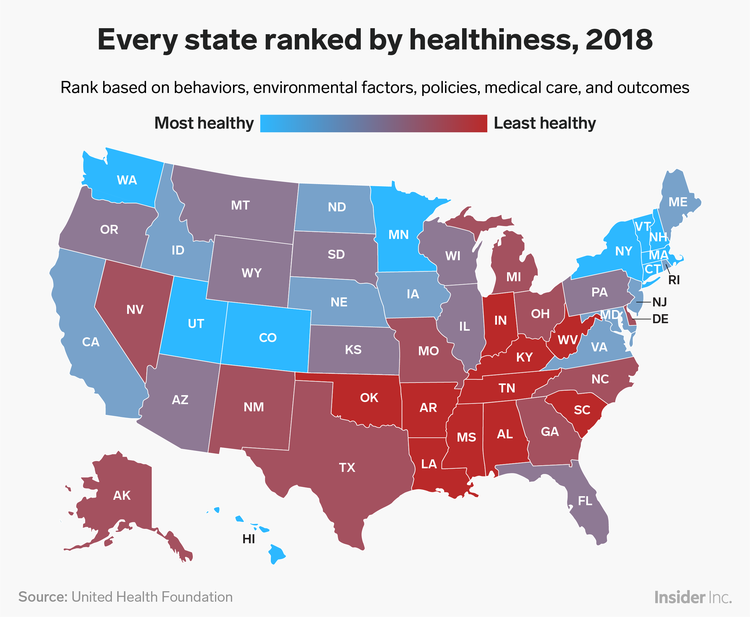 Not all states are created equal when it comes to health.

To get a better sense of how healthy each state in the US is, for the 29th year in a row, the United Health Foundation has ranked America’s states.

Hawaii made the top of the list as America’s healthiest state, while Louisiana was declared the unhealthiest.

Looking at data from the Centers for Disease Control and Prevention, the American Medical Association, and the Census Bureau, the rankings took into account everything from obesity and smoking to community and environmental factors, such as child poverty and air pollution, to public policies like immunizations, and health outcomes like cancer deaths and diabetes.

Here are all 50 states, ranked from healthiest to least healthy.

1. Hawaii has a low prevalence of obesity and smoking, and low air pollution, helping it clinch the top spot for the ninth time since the rankings began in 1990.

2. Massachusetts held the spot as the healthiest state in 2017 but dropped down in 2018. The state has among the highest immunization rates and the lowest uninsured rate.